Can You Run a Marathon PR Using The Run-Walk-Run Method?

At the 2010 Exeter Marathon, I experimented with the Run-Walk-Run strategy that has been popularized by Jeff Galloway in an effort to see how well it would work for somebody that can run a little faster than most of the people that generally make use of the Run-Walk-Run method. 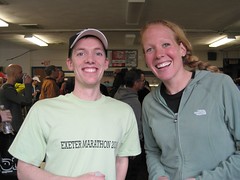 Jeff Galloway first shared this strategy with me a few years ago and told a story about how he had coached somebody using the Run-Walk-Run from a 2:33 PR to a 2:28 PR.

Fast runners are outside of his area of expertise because he doesn’t have enough data on them, so it seemed like a good opportunity for me to add a new data point.

While I was preparing for the Exeter marathon, I got in a few training runs of up to 10 miles using a 15 second walk break every mile as my run/walk ratio. I also did a mile time trial to see what sort of shape I was in, coming away with a 5:14.

I’d call the experiment a success, and think that it’s worth testing it when I’m in better shape to see if I have similar gains over the sort of time I think I’ll be running.

After letting folks know about the results of my experiment, I’ve had 2 reactions. The first is, “Wow, you ran a 2:50 marathon using run/walk?” For all those folks, thanks! It was fun.

The other reaction is to tell me what an idiot I am and how my experiment was not successful because I would have run faster if I hadn’t walked during the race, despite training that’s more like what I’ve run 3 hour to 3:10 marathons than 2:50 marathons in the past.

They also claim that I’m an idiot because I’m even considering using the run/walk method at some point when I am in better shape and want to make a run into the 2:30s.

I’m not saying that I’m guaranteed to make the goal, I’m just saying that it seems worth continuing the experiment.

For my race this weekend, I had little to no speedwork since I broke my foot last July. Despite taking substantial time off (45 days of no running at all, a few weeks of very light workouts, a few weeks of no running just hiking while traveling, and then slowly building my base back up through the end of 2009) I did get a good base of miles in during January and February.

In March, I didn’t really know what I was going to do and had decided against registering for the Vermont 100, so my training went into maintenance mode (as much for mental recovery as for physical.) I felt that I had a good base despite relatively low mileage for a fast marathon leading into the race. My 8 week average was right around 42 miles per week.

I can’t definitively say I was in 2:54 shape, but that’s what I honestly feel I was at based on my dozen plus other marathons, my previous training for those races (where 40 miles per week plus speed work was usually a 3:00-3:10), and on my usually accurate guessing of where I’d finish. My guess may be subjective but it is good enough for me.

During Exeter, I followed the run-walk-run strategy, and managed to run better than I felt I was in shape for had I run straight. Does that mean I wouldn’t have run faster had I run the entire thing? Possibly, but I don’t think so. I sure felt pretty good at the end, and got in a good hike the next day without any trouble.

Do I think that this strategy will work for everyone? Probably not. I don’t think it would have worked for me had I not practiced it in the weeks leading up to the race.

I didn’t bother wearing my heart rate monitor, and I rarely do, so I have no idea how it affected my heart rate. I think that the biggest benefit for taking the walk breaks is that it gives me a good opportunity to stretch out my back, give my muscles a quick breather with a different motion, and reminds me on a consistent and regular basis to reassess my running form.

I’m generally pretty good about assessing my form anyway, but I don’t think in the past I’ve had the discipline to remind myself 3-4 times per mile, which is what I easily found myself doing when anticipating walk breaks, restarting from a walk break, and a few times in between while watching for an actual place to take the walk break to best effect.

Any race, but especially long races such as a marathon, is as much if not more of a mental game than a physical game. Sure, you need to be in good shape to run a good time, but you can be in good shape and still run a bad time if your head isn’t in the right place. I think that the walk breaks helped as much with the mental game as the physical.

So, that said, I want to get into better shape. Then I want to try this strategy in a bigger race where I’ll have people to run with. I want to see how I’ll do.

If it doesn’t work, I’ll go back to racing flat out. If it does, then I’ll probably still race flat out at some point, but I’ll keep playing with run-walk-run.