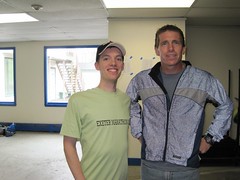 Last year, I laid out my plans about a week before the inaugural Exeter Marathon. I ran a Magic Mile and used Jeff Galloway’s charts to convert that mile time into a marathon time, and talked about my run/walk strategy I was planning on running.

Fast forward a year, and it is now 2011 and the Exeter Marathon has become the Gansett Marathon, having moved from Exeter to Naragansett to better support the growth of the race. While last year’s race was a fine course for the number of people, it wouldn’t have supported the type of numbers that are expected over the next few years.

With 197 runners registered for this year’s race (almost 4 times as many people as finished last year) it seems as though that growth factor is a legitimate concern. I will be going into the race ranked 11th out of the 125 men registered (and ranked above all of the women that are registered) so it will be interesting to see how I run compared to last year’s 8th place finish when I was ranked 4th in the field.

I plan on racing with the same strategy that I used last year, namely running a mid/high 6 minute pace for a mile and then walking for 35 steps (about 15 seconds) at each mile marker or around thereabouts depending upon what’s immediately obvious about the course. I’ll continue that strategy for the first 20 miles and then race the last 6 miles in without taking walk breaks.

There are 2 major differences between last year’s experiment and this year’s experiment. First, I haven’t been practicing a run/walk during my training runs at all since last year’s race other than one time this weekend. I seemed to do all right with it so I’m not too worried on that front.

The other major difference, though, is in how I’ve trained for the race. My training in 2010 leading up to the race included only 2 weeks below 40 miles per week, with a weekly high that January of 148 miles (the furthest I’ve ever run in one week.)

This year, my training is remarkably different: My training this year has consisted of:

So in other words, I’ve been running below 30 miles per week except during race weeks this year, which include 3 snowshoe races, 2 marathons and 1 ultramarathon. Only 1 of those races has been on roads. It’s done wonders for overcoming any nagging injury issues that I’ve built up over the past year, but will it allow me to run another 2:50:26 marathon using a run/walk strategy like I did last year?

I guess on Saturday I’m going to find out.

So what are your predictions? Do you think I can beat last year’s time on the new course with less training and overall mileage? What time do you think I’ll finish in? Leave a comment below.