Women Shouldn’t Be Allowed to Run With The Boys 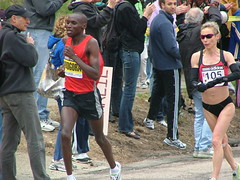 Not according to the IAAF anyway, which is the sport’s international governing body.

They currently have a motion in place to invalidate all world records for women who ran in “mixed” races that included men.

For a very high profile example of what this means, it will raise the women’s marathon world record by over 2 minutes from 2:15:25 to 2:17:42. Paula Radcliffe will still hold the record because she’s the best marathoner in the world, but she’ll still be penalized 8 years after the fact.

For some reason, though, they don’t think that they should invalidate records for men that involved women. Sure, in smaller races where the men and women start at the same time and that would involve a world record there are rarely any women running up front with the men, but at other races the women get enough of a head start that they’ll finish separately than the men which gives the finish more excitement for the fans. In those races, however, the men have to catch up to and pass the women in the race that aren’t the front runners, which I don’t see as much different than a woman who has to pass a man during a race.

I’m not alone in my thinking; the race directors from the World Marathon Majors and the Association of International Marathons also think it’s a little ridiculous and have warned the IAAF that they won’t recognize the new rule if it is passed.

If passed, this ruling is a step back in time. What will they propose next? That women shouldn’t be running marathons because their uterus will fall out?

What do you think? Is this new ruling sexist, or do you think that women being allowed to run with men is an unfair situation and records shouldn’t be recognized from those races?